Skip
I have a boyfriend.
And boyfriends have birthdays. Oh yes, they do!
I love birthdays! Especially when its my own. ;P
This was actually my first official time spending Mark’s birthday with him. The other times as friends…. My gosh. I never spent his birthday with him! O.O
Lets break it down a little bit.
April 2009 – We weren’t all that close yet. After all, we knew of each other’s existence only about 2 months back. I’m pretty sure I wished him on MSN! 😀
April 2010 – We were at a mutual friend’s birthday party, so I just assumed it was a combined thingy. After all, he was just so busy in NS… So I didn’t really bother.
My, my. I was a horrible friend. Whats more, I caused him so much inconvenience… The least I could do was to give him a birthday present!! But noooo~…. I just saw him at the party, someone told me his birthday was the next day or the day before or something… So I went over, “Hey, Mark! Happy birthday!”
*lowers my head in guilt* ….I’m a horrible person…. 😦
However, I’m pretty sure that I made up for it this year! After all, he is my boyfriend now.
The main present that I got him was a little webcam!

Screenshot from the video I prepared for him.
Okay, honestly… I liked this one because it had nice designs on it. Haha! And also, it was really just for Skyping purposes.
My darling boyfriend, as much as he is an IT-person; ironically doesn’t own a webcam.
So imagine how I feel every time we Skype together. He can see me doing my nonsense in my room, while I just see this:

Gets a tad annoying after a while. -.- Especially when he took countless screenshots of me! And I cannot take a single one!! Roar.
Oh yes, let me tell you a little more on the video I made for him!
Y’see, I have written love letters before. However, I have never done a love video before.
Something different, eh? 😉
It was really lame. Trust me.
When lil’ lame me says it is lame, it must be a heck load of lame.
I had birthday greetings from my cute pooch. Which Mark gets annoyed by, by the way. 😉

I even impersonated Mark in the video, to show how wonderful our future Skype conversations would be – thanks to the webcam I got him!

Yes, I look ridiculous.
Continue reading when you have finished laughing.
My boyfriend got a tad irritated when he saw this part. Hahaha!!
The part of the video which took most effort was this: His birthday song!! 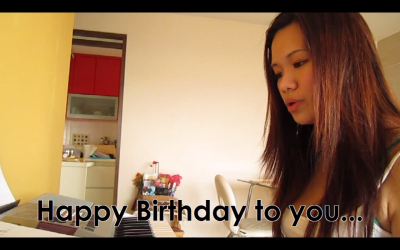 I was singing & playing the piano at the same time. Plus, I rewrote some of the lyrics specially for him! 🙂 My gosh, I’m so sweet. Heh!
Y’know why it took the most effort?
I didn’t touch my keyboard for such a long time!!
So I slogged on the keyboard practically overnight, just to make sure I was able to play at least decently. I must say, I failed. -.- The video wasn’t all that fantastic.
With that cross behind me, it almost looks like I’m playing in a church.
Mommy will be so proud.

Speaking of Mommy, when she knew that I was going to celebrate Mark’s birthday today… She bought back some awesome chocolate cake!

I know it looks like nothing, but this baker is *drool~*…. He’s not hot… Okay, not that he is ugly… I’m just digging a deeper hole with this.
His pastries!! …Ah yes, are wonderful. 🙂 He used to be a chef at Shangri-La! And he retired & opened a little bakery in my humble neighbourhood!
And Mark’s present. Nicely wrapped up in Japanese wrapping-cloth! 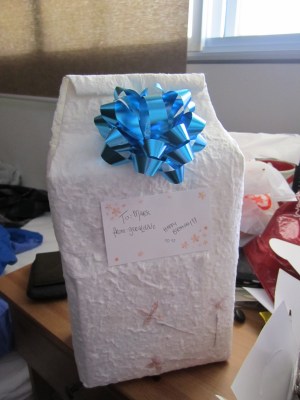 Did I ever mention that my boyfriend is annoying?
If no, let me inform you.
If yes, let me remind you.
He is soooooo annoying!! He saw the present, looked so excited, picked it up & kept on fiddling with it…. Next thing, he blurted out the exact things I got him!
“Its a webcam & a DVD!!”
Roar.
I don’t know what to do with this boy. He’s too smart for his own good. He beats me at all the games we play in the arcade, he anticipates all my moves…. Sickening.
But I lovey-wovey him~!!

For lunch, we went to a place of nostalgia!

Well, not for me. I’ve never been there! It was for Mark, though. Apparently, he & his buddies would come here very often last time. Then when they all slowly moved out, they just stopped going so often. 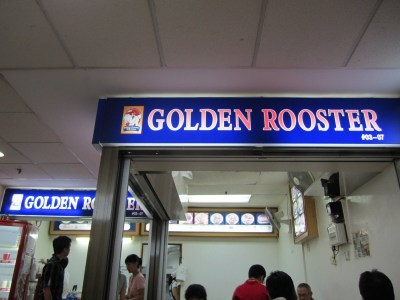 It reminds me a little of those eateries at the top level in Far East Plaza. Small, humble & serving local delights!
A plate of Kampong Fried Rice!! Which was spicy, by the way.

I cannot really eat spicy food…. So I was best friends with my cup of Milo throughout the meal.
I was bloated. I don’t know if it was really the rice, or it was just loads of water. Regardless, Mark remembered something I said, “I want to get my driving license so I can drive to a drive-thru!!”
Its a really bimbotic reason, I know. Even I think its stupid.
If I told Mommy that was my reason to get a license, she’ll never sponsor me. 😦
Anyhow, Mark being the sweetest boyfriend ever; remembered what I said – so look at where he brought me to!
A Drive-Thru!!!!

Quite a sight! Usually you don’t see taxis going to drive-thrus for their passengers. The passengers ordered a heck load of stuff!! O.O
Anyhow, we queued up in the drive-thru… Only because I wanted to go to a drive-thru. -.-
So just to make everything a little more logical (even when I know its not), I ordered an ice-cream.

On that note, I was actually losing terribly….but luck was on my side! When Mark was going to win the whole thing by shooting the black ball in, the white went in as well!
Making me the winner by default! 😀
I love you, honey!

Dinner time! He invited his close friends from JC days to one of our favourite eateries; En Japanese at Crown Centre.

I like his friends! They’re all so friendly & cute. 🙂
This is Anson & Jun Yong! 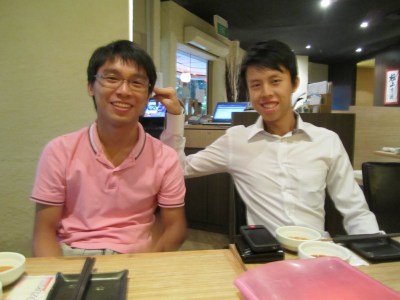 Especially Anson, who is endlessly amusing! 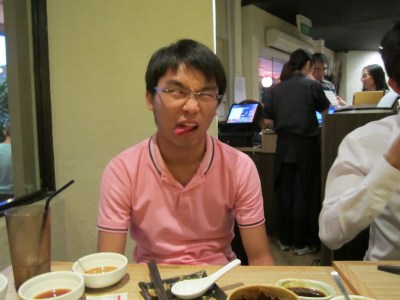 He actually tried cooking his meat in his spoonful of hot soup. 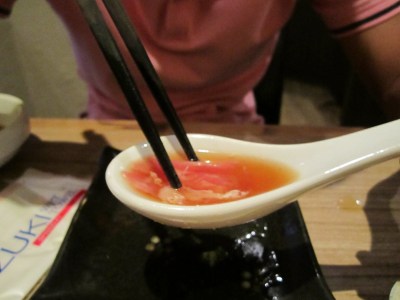 Things weren’t working out, so Mark poured in some S.O.S. Rescue soup to help complete the operation! 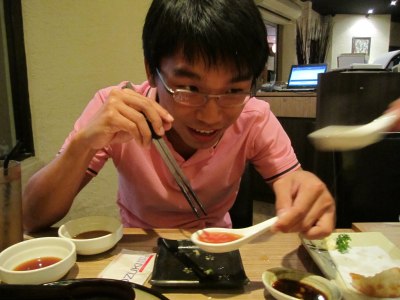 Well, not like I didn’t do anything weird…. I was talking to Mark when a grain of rice flew out of my mouth. He even took a picture it. -.- 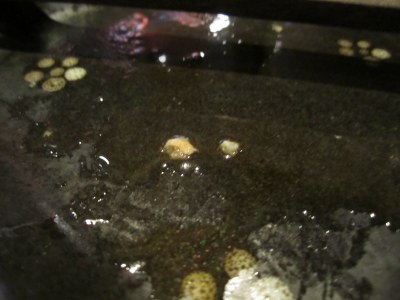 This is why you love buffets! Everyone just dives in shamelessly. 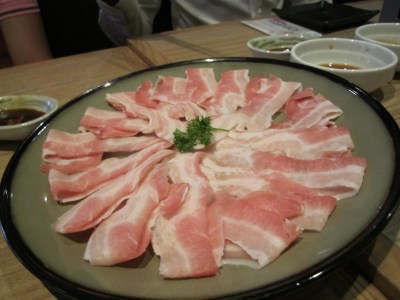 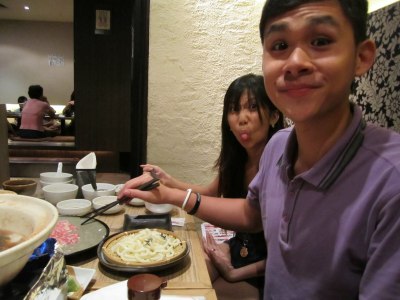 Totally unglam picture of me, but I think Mark likes this one because of my hamster cheeks.

When people are full, we do different things.
Jun Yong sat down in satisfaction, Anson was doing the boogie!! 😀

Dinner was simply great. I love eating at that place!
Mark brought me there just before he popped the question, on our Valentine’s date & now for his birthday! :))
So all 6 of us cramped into Mark’s car. The good thing about being the driver’s girlfriend is, you get to sit on the passenger seat in front! 😀 …While the others just have to make do with the space behind.
One of his friends, Jordan; is really tall & has really long legs. I almost felt guilty sitting in front, because he had to cramp up behind.
Then again, for all that he does to bully me… I don’t feel guilty anymore!! ;P
One of our favourite games! 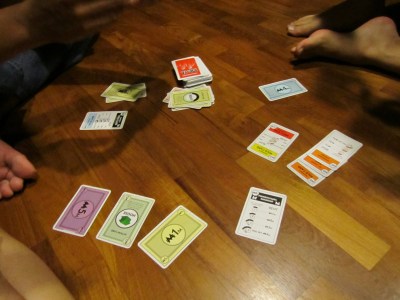 Wore one of his shirts to be a little more comfortable!

At night, it was time for their mahjong session!
I don’t know why some people simply assume I know how to play mahjong.
“But Geraldine, you look like you’re going to be a tai tai!!”
Well, I guess I don’t qualify then.
So before they officially began their game, Mark drove me home first!
On the way home, we saw a roadblock at the other side of the street. Mark looked at me and I already knew what the glint in his eyes meant.
We took a detour to go by that road & we were stopped by the roadblock.
We were checked & everything.
Got back into the car….
Mark & I: OUR FIRST ROADBLOCK!!!! :DDDDDD
Well, all I can say is… Mark & I enjoy doing things together!
My boyfriend brought his present along, so that he could open it in front of me.

The DVD I made for him! Which I kind of guess he seems to like a lot more than the webcam.

Honey, whatever I wanted to say… Its already been said in the DVD. 🙂
But I’ll say it again!
You make me unbelievably happy. 🙂

And I love you so much.
Maybe its because you….
Wiped away my tears when I cried,
Stood up for me when I was bullied,
Held me when I was scared,
Irritated me all the time,
Cracked jokes to make me laugh,
Tolerate my lame crap,
Stayed by me through thick & thin….
Or maybe its just because you’re you. 😉
Happy Birthday, honey!