The thing about being a female is…. I tend to have a lot of wastage.

One of my boyfriend’s shirts can easily be about $100.

The main reason is because, females change their clothes all the time. We see something new & we like it, we buy it. Boys don’t even look at something new, unless they need it!

So every few months, I clear out my closet of clothes which I’ve gotten sick of wearing.

I’ve gotten that feeling loads of times! And I’m happy!! It makes parting with that clothing a lot easier. 😀

So when my classmates suggested selling handmade bags made out of old clothes, I instantly approved it!!

Every year, my school has an event called Campus Care Network (CCN) Day. Students would be invited to open up booths & sell things. All revenue would go into helping our financially-challenged students.

The whole project made me feel like a saint.

I have about 3 thrash bags full of unwanted fabrics, but they were kept away in some boxes in a deep, deep corner of a room. So I dug up whatever I could and stuffed them all into this big Watsons bag!

Some classmates & I were going to Arielle’s house to make the bags! I was quite excited…. I never made a bag before!! :)) 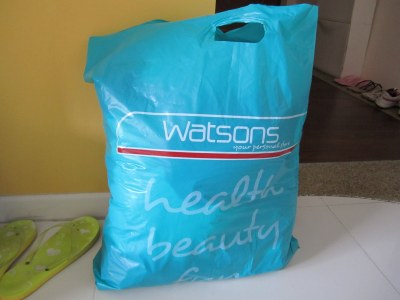 Arielle was such a my travel-angel that day!
She drove down to my place all the way from Serangoon to pick me up. Then drove me down to Bukit Timah to pick up more clothes from my relatives.
I seriously don’t know what I would’ve done without her…. I’m already tired as it it. I surely don’t have the strength or the means to go around with TWO big bags of clothing.
Okay, I did consider taking a taxi. Just that it would’ve been extremely expensive to travel around Singapore like that…
Small as Singapore may be, it still would be at least a good $30 by the end of the journey.
Relying on Arielle’s Google map, rather than the lying-GPS on her car!! 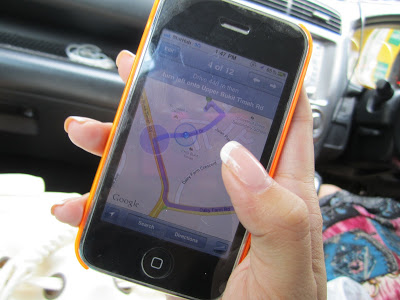 We pretty much traveled around the entire Singapore.
We went to the West, Central, East, North…
Sigh. It is moments like this I push myself to go get my driver’s license. So next time if there is anything like this, I could just pop into my car!
Plus! Plus!! I could go to drive-thrus & order food!! :)))
Totally weak reason, I know.
So after all the traveling around, the group of us arrived at Arielle’s house. Letting Ms Si Hui, our shirt-convert-to-bag teacher, show us the ropes!! 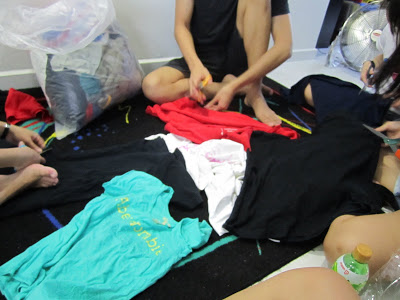 Master Si Hui and the bags we made so far!

Look at this one! One of my old shirts.
I wore it only once & decided to throw it out because it looked like some prisoner top. -.- 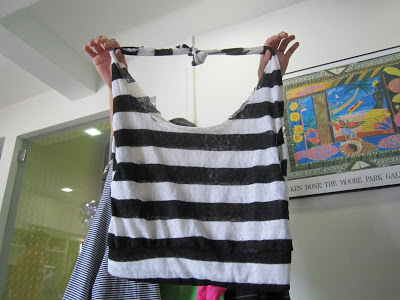 We ended work a little early, Arielle had to go on a hot date!! 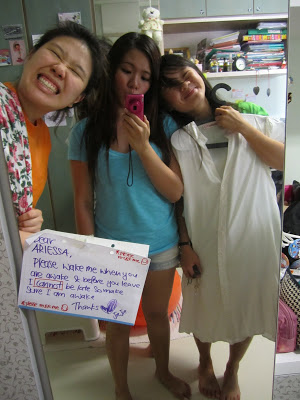 A few days passed with (literally) a wink of an eye.

When things get so busy like now, I’m beginning to think that one day is a long time. Now I know how those mega-busy people feel whenever they say, “I cannot give you the whole day! I can accommodate you for only 2 hours tops!!”

Good thing I don’t say such things to Mark. 😉

So came the actual day of CCN Day!! We had early morning lecture, which was really quiet by the way. -.-

Well, honestly… I just might skip lecture if I wasn’t class president and had to be at the booth from beginning to end.

We accidentally dropped something, Lawson running down to retrieve it for us!

Writing up our signboard! No where to hang a proper sign anyhow, so we had to use this clipboard. 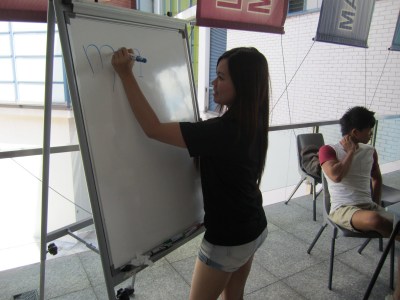 We did loads of editing along the way. -.-

Manicure services offered by my dear friend Wai Soe, who is literally crazy with nails. She changes her designs practically every single day!!
The people who were up all night doing up the handmade bags!!

Bags going for sale!! I must admit, some were really cute! I was tempted to self-consume…but my boyfriend reminded me that it was for customers… Bah. 😦 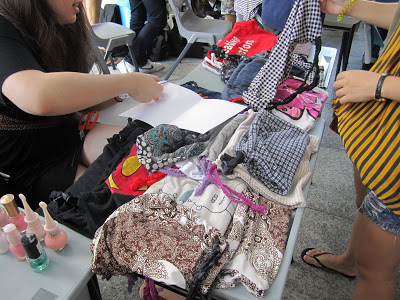 Now to the manicure section.
Ferlyn & I brought our polishes. All the girly-girly colours, yes? 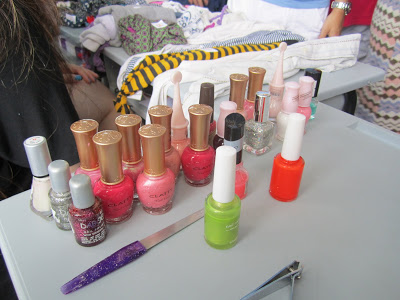 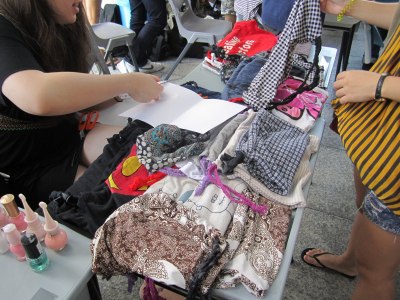 And I painted this multi-coloured one for Ferlyn too! Her fingers look like jellybeans!

And this? Well, it was another guy’s.

I know the painting is really messy…but I was really trying to contain my laughter. 😛

The world is really turning the tables. I actually had just about as many male customers as female customers. O.O 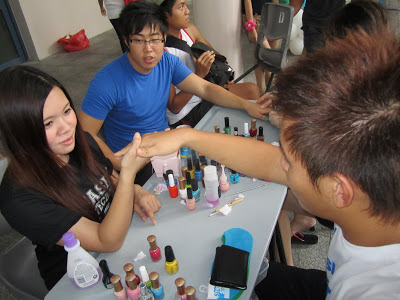 And this one even asked for polka-dots!
Whats more, he had to go for dragon boating practice on Sunday. ;P He’ll be the hottest guy on the team.

My own manicure tattered because of the manicure I gave people. 😦

I was thoroughly well-fed in my booth!
I honestly didn’t leave the booth. Only for the washroom, of course. No one could really help me clear my bladder, except myself anyhow. 😉
Fifi treated me to this ever-yummy doughnut!!! Filled with loads chocolate!!

My daughter (not biological daughter ah!) brought me a can of drink from her booth!

She even brought over sandwiches for me. ❤ *sniff* I'm so touched. Such a filial daughter. 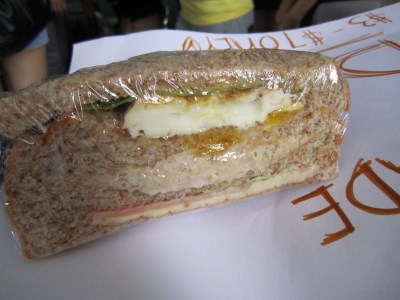 And I had a pleasant surprise… My boyfriend came over!
Despite me telling him not to come, because I felt like I looked like a positive wreck. -.-
But stubbornness was always one of his traits and I love it. ;P
Sheesh, talk about bias.
He went to get my favourite brownies from The Icing Room!

And he even brought some of my favourite macaroons!!!

I used to always buy the ones from Bakerzin, but since they changed their flavours into some really weird ones… I converted!

Call me conventional, I still prefer those simple flavours.

Mark hung around till I packed up & left! Talk about patience. I’m grateful his phone has loads of his games inside, for him to entertain himself. If not I’ll see a grouchy boyfriend in the car.

After which, he brought me for an awesome meal!

I swear, I’m getting fatter. All because of my boyfriend who is feeding me all the time.

Welcome to my blog! Really hope you enjoy your time here. ☺️