I’m the kind of person that simply adores watching movies.
Be it in the cinema, or lounging at home with a rented DVD – it’s my kind of activity.
Maybe that’s why I never went clubbing with friends… I’d much rather just stay home, order take-out and watch a good film.
Anyhow, through my years of movie-watching… I have never once I watched a movie (in a cinema) alone.
Even if it was a film that I really wanted to watch, but if no one would watch it with me… I’d usually give it a miss and wait for the DVD.
However this time, it was entirely unexpected.
I asked my cousin Kath to watch “Life of Pi” with me. And it turned out to be a mini family outing with my other cousin and aunt. 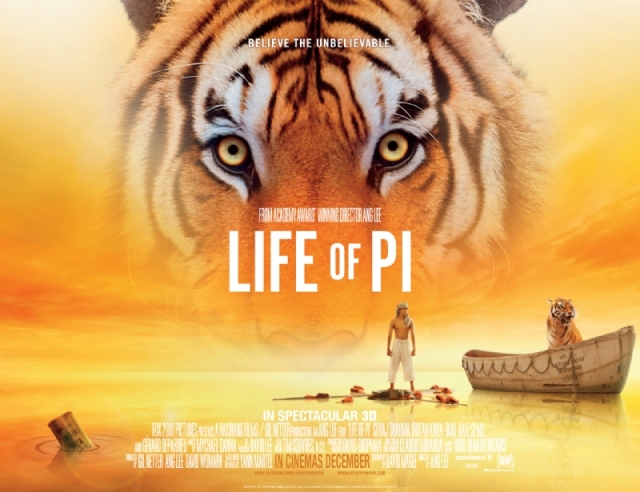 So the funny thing was, I actually already asked another friend previously to watch this show with me.
Friend: Yes! Let’s go watch! I love the tiger! And the boy is quite cute.
Me: Yea, I like Ang Lee.
Friend: The Indian boy’s name is Ang Lee??
Me: *deciding there & then I need smarter friends* No…. The director is Ang Lee.
Friend: Who cares about the director?? I don’t see him in the show.
Me: Without the director, there would be no show to see at all – period.
We were supposed to go next week, but I really had a movie-itch. So I ditched her. 😛
Anyhow, everyone ought to know who Ang Lee is!
However I have come to realise that I’m such an oddball – because almost no one does.
Every time someone says “director”, it is always Steven Spielberg or Jack Neo (in Singaporean context).
Well, everyone should know this dude too anyways.
Remember the name! Remember the face!
I think he has this utterly adorable & fatherly face.
And plus, he is the first Asian to have won the Best Director Oscar, people! So all Asians should like go, “Woo!!” right now.
I’m Asian. And I totally would do that.
I don’t know a lot of directors, honestly. But I know this dude!
Okay, I’m digressing. This whole entry is supposed to be my experience on watching a movie alone.
So yes, I was supposed to watch the movie with my cousins & aunt – so how did I end up alone?
Well, it was a Friday night. And we got to the cinema at about 8PM for a 9.45PM movie… Thus the cinema was a tad full by then.
It ended up with the guy behind the desk saying that we would have to sit one-by-one.
And all of us decided, “Sure!”
Before the movie, we sat in the Golden Village cafe lounge and drew our tickets. Just to see who sits where.
Kath: There are 3 aisle seats, 1 non-aisle. I have already chosen the non-aisle one!
Me: Fine. Then you take the non-aisle one away. I don’t want to have a non-aisle one anyway.
Kath: Hmm, on second thought… I won’t take the non-aisle ticket out yet! Maybe you’ll get a chance of choosing it!
Me: Love you too.
-.-
However in the end, I got the aisle seat. Phew! Makes it a lot easier to just settle down; especially when you’re alone. 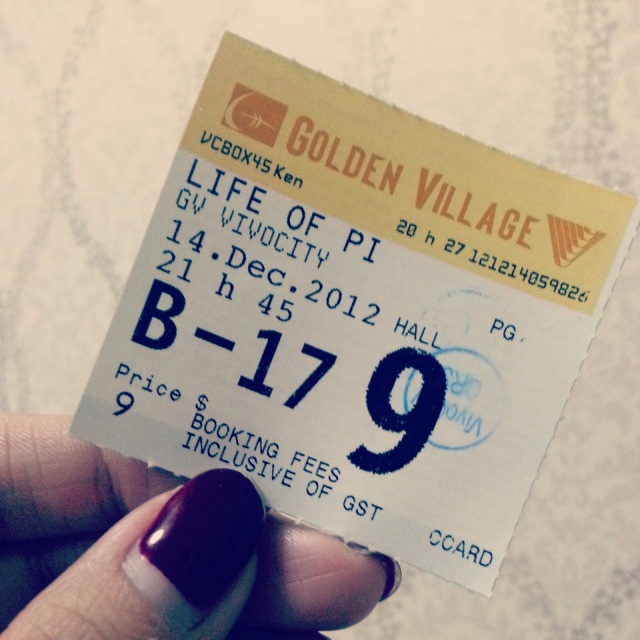 So we walked into the cinema…
As I was walking, “Oh crap! I got no one else to help me find seats… It’s DIY today.”
Roar. So I walked down and looked earnestly for my seat.

Usually I’d just depend on the friend walking in front… but this time, totally different story, no?

So when my eyes landed on the “Row B” – they literally sparkled!

Just when I was about walking to my seat, the couple next to the aisle seat were allowing me to move past them.

However I just smiled and sat down on the solitary seat next to them.

And the girlfriend cast me an astounded look. And she said to her boyfriend (not very quietly even, may I add…), “Oh! Dear, she’s sitting here alone…”

I understand how shocking it might be – I’d be quite shocked if I saw a girl sitting alone in the movies too. But I won’t be such a bitch and say it so loudly! *rolls eyes*

I was pretty tempted to turn on my Drama Queen mode and go, “*SOB!!* YES!! OH THE CRUELTY OF HUMANITY! I ACTUALLY HAD SOMEONE I ALWAYS WENT TO THE MOVIES WITH! BUT NOW… GONE!!! OH! *SOB!!*”

She’s sure to leave me alone in peace. 😛

Once the movie started, I was so engrossed in the show I barely noticed I was alone! 😀

However throughout the show, I missed sharing reactions to those people I watch the movie with.

Like watching American Pie with a group of friends – one of which is a rather traditional Indian girl. When the scene of the squashed penis came on screen, I immediately turned to look at her face.

I swear, her face was utterly EPIC! I’ll never forget it!

And because I chose that movie to watch – I am now forever labelled as “The One Who Corrupted Malathi”.

She was gasping and went on like, “Thanks, Geraldine! What am I going to tell my future husband next time? That he isn’t the first penis I saw!”

So I replied, “Well, I’m sure he’ll understand… At least now you know what to look for on your nuptial night…?”

So anyways, other than sharing how my reactions – I actually enjoyed watching Life of Pi without anyone looking at my reactions.

For one, everyone loves to make fun of how I overreact during movies.

Like if a director wants to see how the general public would react to his/her film, I’d be a concentrated-sample.

So even while the Tiger wasn’t really doing anything much, but growling away… I was covering my eyes because of the background music.

Or when nothing was happening… I’d also be getting ready to shut my eyes.

Simply because whenever nothing happens for a while – chances are something big is going to happen in a bit.

So even though that girlfriend seated next to me was throwing pitiful looks at me throughout the entire movie, it was quite okay – because I’m not even going to see her again anyway!

On the side, everyone should catch Life of Pi! I think it is a brilliant movie! The way the story unfolded as purely magical. I always appreciate a director’s ability to retain the audience’s attention – feeding him a little to not let them be frustrated, but not enough for them to crave for more.

It is a beautiful story about Life, really.

I guess it is the kind of show that everyone takes home something different.

I saw it that God takes away things from you all the time – but he also gives you what you need to survive. Life was never meant to be too comfortable – that is meant for your time with Him in Heaven. Life is filled with pain & suffering – anger & bitterness, fear & mistrust.

However every now & then, you catch a glimpse of the beauty in God’s creations. And it is so magnificent that you know that there is good in this world, somehow.

If you ask me, I think God is quite a heck of a director to me.

So many times I wanted to give up on this movie; it got too bleak & ugly for me to enjoy.
Then He’d show me something so beautiful that I refuse to give it up at all.

After everything, life’s quite the story.