Since I became a full-fledged adult… (not that long ago, actually :D) I tried my first waxing.

Brazilian waxing, to be precise.
Somehow it is still a rather bashful sort of topic among Asians – even in “internationalised”-Singapore.

First time I tried it, it was really out of sheer curiousity. However now it possesses several other benefits! 😉 Especially during the “bloody week”… Oh, yes.

So I have had tried out 3 of Singapore’s most well-known waxing parlours:

Probably the oldest of the lot – Fabulous has indeed carved out quite a name for itself in the aesthetics industry. Other than their spray tanning services (not for me, I prefer to be fair), their waxing services also received raves that are boast-worthy.
Strip

After some time, I decided to cheat on Fabulous a little to see what else was there.
Call me conventional – but I thought since I showed them my intimate side… *blush* LOL. Yea, sounds really dumb to me right now.
It’s like going to the same doctor my entire life simply because he felt parts of my body before.
Simply rigid and inconvenient.
Pink Parlour

I received one recommendation about this place – and I liked the colour combination. So thought, “Why not?” Plus it seemed like they won some award for the waxing.
FAQ
For a virgin-waxer, which parlour is best?
Fabulous. Not because I did my first time there – but because I feel that they are really professional in this area. A lot more matured in this field and thus can provide more adequate services for waxing-virgins.
I have had friends who went to other places first and had rather horrifying experiences. Not because the waxing was done badly – but it was really the experience on the whole, y’know?
Plus Fabulous has all their first-timer promotions! Pretty cool stuff. Go check them out!
Any of the parlours tried to hard-sell packages?
Hmm… Well, in full honesty – yes. Fabulous was the least! The beautician merely recommended it – but when I declined, she stopped and smiled very professionally. I really like that. And because of this, I actually bought a package the next time I went there.
Strip was a little bit pushier and I had to say “no” a couple more times. Which annoyed me a tad. In fact, the cashier always frowned a little when I refused to buy the package. Bah.

However Pink Parlour annoyed me the most. The cashier just went on & on about how it’ll benefit me and all… blah blah blah. Even when I declined so many times, the packages were recited all over again. Like, I’m sorry. Did I miss out something that you thought I would suddenly be oh-so-interested in??

Which parlour is my favourite?
My personal favourite – Strip. It used to be Fabulous, but the sessions go on for forever… And therefore the pain is prolonged. 😦
I also enjoy the ambience provided by Strip! Another plus point that I experienced myself was – new hair growth is actually a lot slower & finer after my sessions at Strip! *glows with delight*
So, yes. Strip it is for me! 😀
And I like their advertisements too! So adorable! 😀 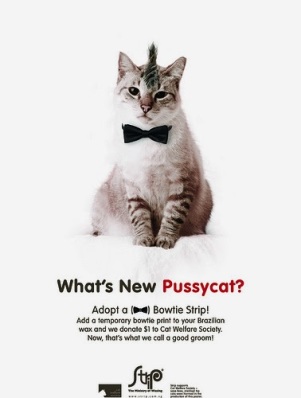