It was yet another early morning… But I was quite hyped up to see the Buddha carved out of a mountain!

We were up even before the Sun. And the hotel was closed… Before operating hours. I was a little shocked when I walked into a dark lobby, with absolutely no personnel.

Never encountered such a hotel before, but that’s just how places like that do things.

Breakfast was served at the humble restaurant we had dinner in the day before. 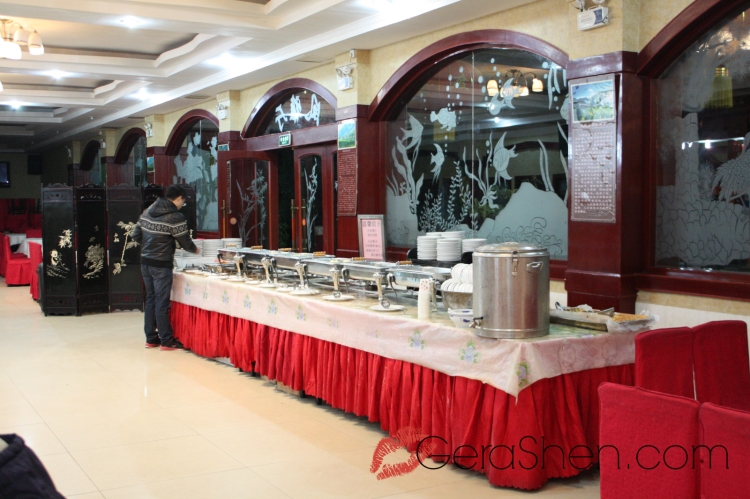 I wasn’t entirely accustomed to the food in this place, granted. And each person was limited to only 1 egg.

Well, anyways… That day we spent a lot of time on the bus. The only reason why we had to leave so early, was just so that we would make it in good time to the next tourist spot! 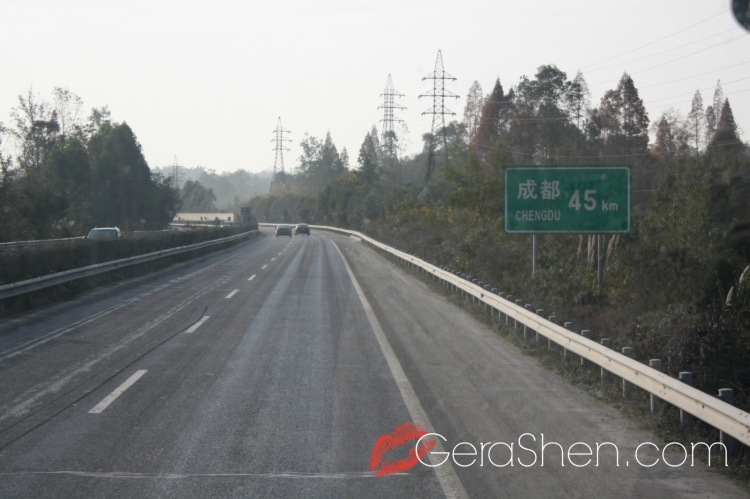 I still wasn’t used to the super long bus rides- in Singapore, there’s no way a vehicle ride could take that long. Unless you’re going in circles… Then yea.

Otherwise, you’ll reach from the far east to the far west in about 2 hours tops.

Another thing that intrigued me were their tunnels… They went on for FOREVER.

It was so dark inside, it was almost impossible to grab a proper photo inside. But the entire journey just within the tunnel itself was easily 10 minutes.

As intrigued as I was, I was really sleepy… I woke up so friggin’ early!

Here, have some unglam drowsy pictures of me.

After the bus ride of centuries, we were brought to lunch. Immediately perked me up.

Nevertheless, I enjoyed the food thoroughly! I really don’t know if it’s due to my hunger & total lack of satisfaction for breakfast- but the steamboat was downright delish!!

Before they served us the food, Kath & I actually ran across the street to the shopping mall in hope to pick up some stuff… And here’s the funny part.

We had to rush back so that everyone could eat together (we’re considerate that way. Plus very hungry.)

And while Kath ran through an automated glass door.

I ran into a glass window.

My forehead was really red for a while… And everyone was staring. But all I could do was laugh at how hilariously stupid I was. And Kath was freaking out, she was all, “Dude, are you okay? TELL ME! ARE YOU OKAY??”

Looking back- she had legit reason to worry.

To Kath- I wasn’t okay, I think. I was deliriously happy; like when I’m drunk. I completely forgot about everything! LOL. I just knew you’re someone I’m safe with. Good thing you didn’t know this there & then, eh? You’ll be freaking out even more. HAHA. 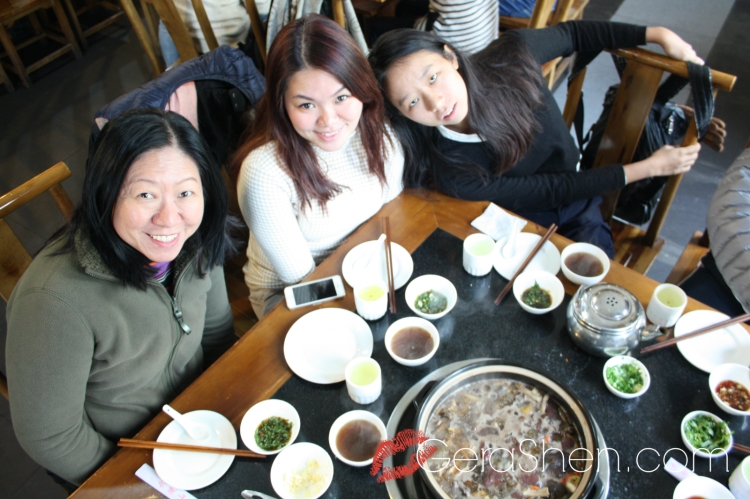 Well, the highlight of the day wasn’t the little bump on my forehead. God knows how many brain cells died…

We were setting sail to see the Buddha that was carved out of a mountain! I was totally hyped to see that.

I was pretty against wearing a life-vest… I hated wearing them.

I classify it under “boob problems”. They’re just so uncomfortable around the chest; and with all the layers I had on for the weather, an extra orange layer made me feel like a pumpkin.

But grandpapa cajoled me into wearing one…

I was always in love with Chinese ingenuity- super proud to be one! *proudly beams*

Now why did the people spend so much time (3 generations, to be exact) to carve out this Buddha from the mountain? It wasn’t like one day a bunch of them went, “Hey, I don’t think we will have anything else better to do 3 generations. Let’s go carve a Buddha out of this mountain.”

Y’see, that area is largely surrounded by water and people traded/travelled mostly by sea. However the waters were often unkind and took many lives with its fierce waves. The village folks back then said it was a Sea Monster that lived within the waters that was beyond control and out to hurt the people. So to counter this, a Buddha had to be present to ‘discipline’ the Sea Monster.

The people even had to make sure that the Buddha looked stern- not the laughing, happy-looking one. For those who are unfamiliar with Buddha, he comes in various variations…

So after 3 painful generations of hard work, it apparently worked! When the Buddha was complete- sitting there, looking stern & all; the Sea Monster was subdued. The people travelled through the waters with much more ease and days were less dangerous. 🙂

However modern day science tells us that the logical reason behind this was because when they did the carving of the Buddha, rocks fell into the waters. This contributed in stablising and ensuring that the waters didn’t have so much movement.

Regardless- I’m glad the people saw happier & safer days! ^^ And plus it’s so huge, you can have a little home on his head apparently.

There are just some moments in life when I wish I could just drop everything, come to a place like this- live simply for a while. Forget about all those materialistic desires, thick masks people wear, constant chase for a happy ending we’ll never be happy with… 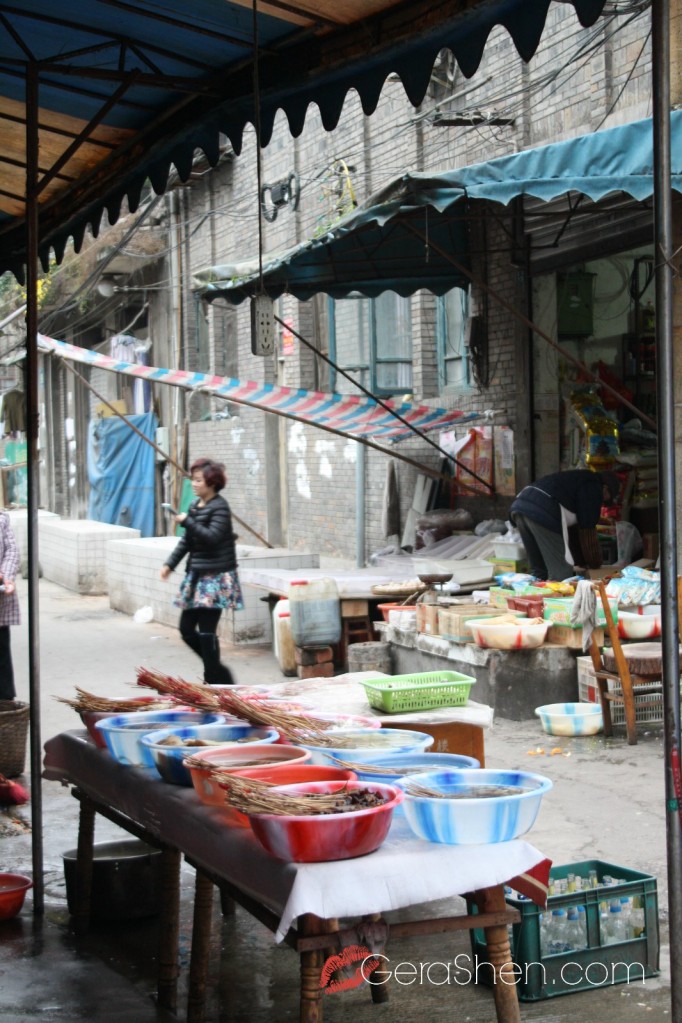 That destination was wayyyyyy out- so it was yet another super long bus ride back. And by that time, it was time for dinner!

Look at this little cutie that I spotted outside the restaurant. ❤

She reminded me SO MUCH of Meowster (my little black kitten) back in Singapore… I missed my babies terribly during the trip.

Ma Ma wasn’t too pleased with me… Well, she never wanted me to have cats anyway. She keeps on telling me to get rid of my cats because they’re not good for my health.

Then when she saw me playing with this one…You can guess what happened. LOL.

It was a pretty eventful day! At night we were brought to this show- much like those you can see at Sentosa RWS.

The entire place was a lovely place. It was a pity we got there late, so we didn’t get to see much. But I still enjoyed looking at the gorgeous architecture nonetheless!

It was quite a beautiful place. Look at the lotus on the ceiling!

And as usual, I was the only one that had to pee.

I wandered off to find the loo… Came back, feeling lost. Having no contacts didn’t help in finding my own group.

Of course I didn’t want to miss ONE BIT of the show- so spectacles on, please!

It was even more adorable since they were seated together!

And then they held an auction! With a man that went blabbering on & on about how wonderful each piece is.

In full honestly, I wouldn’t mind buying one- because there were a few I found really beautiful & would love to have in my home.

Just that… I don’t really have a home.

I will make that for myself in time. 😀 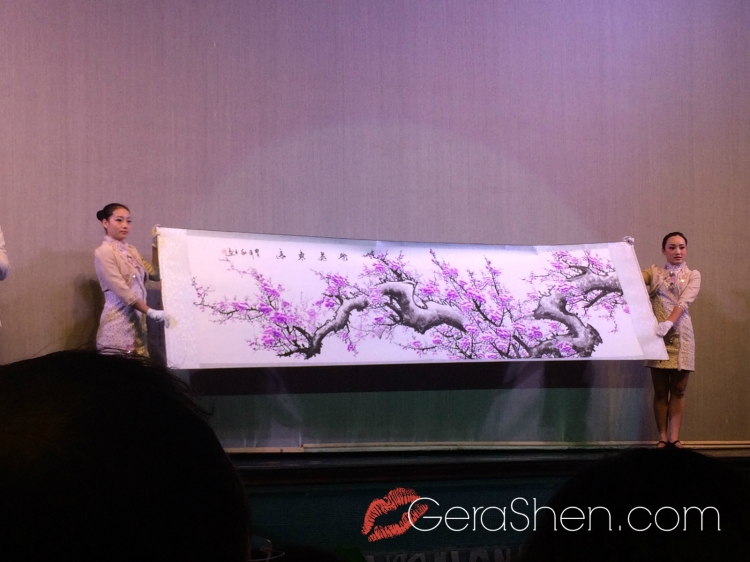 I heard a number of women swooning. My aunt was quite pleased…

So here’s one more for you ladies to enjoy. 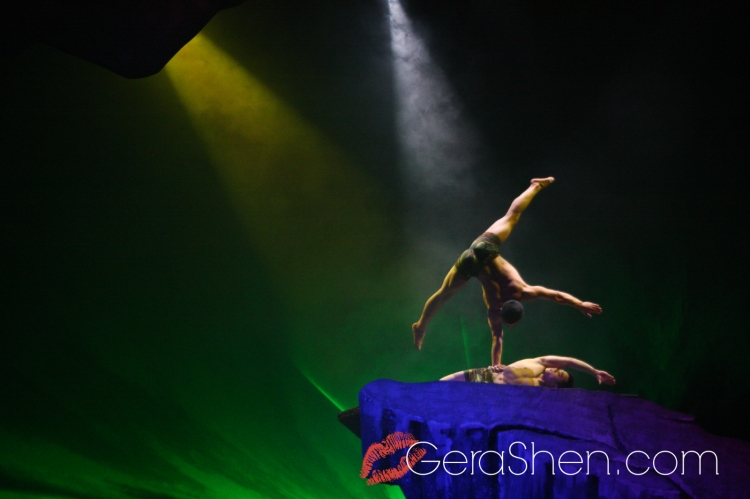 The next part had this man who could use his puppet to do calligraphy!

It was really quite hilarious! I laughed so bad I cried.

The show was wonderful! I really enjoyed it! ❤

But I couldn’t wait to get back to the comfort of our hotel room… It was a pretty long & tiring day. 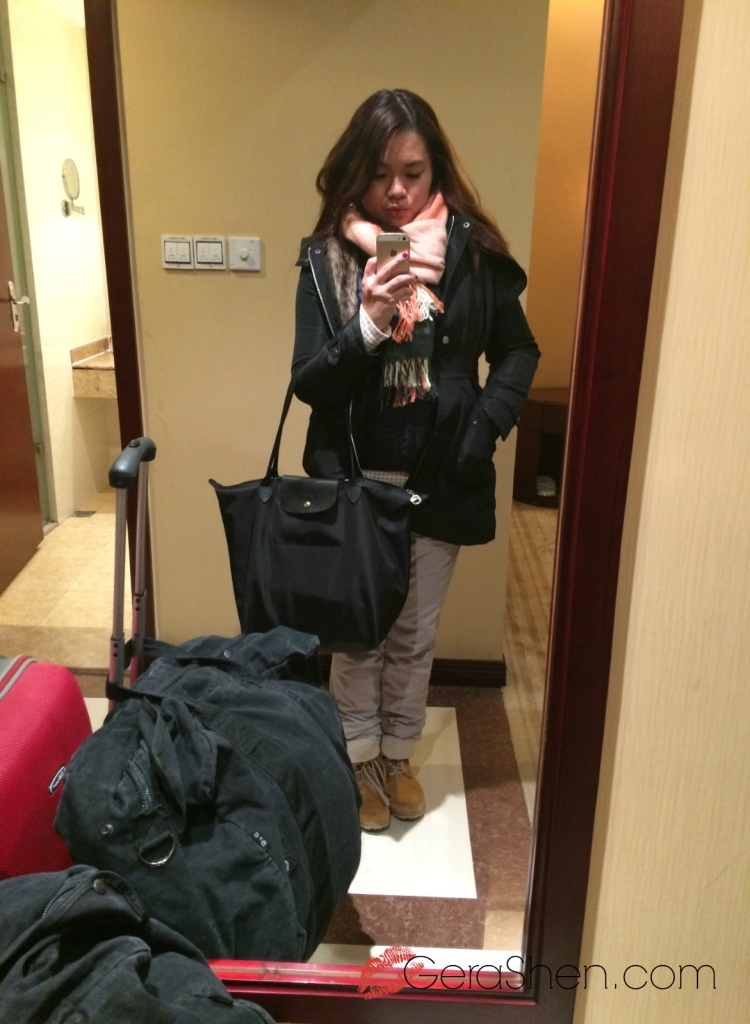 It wasn’t particularly a WOW kind of hotel, but it was mighty comfy!

And the service was great. I couldn’t get proper Wifi connection in my room; they sent technicians in to set up a router specially for my room! And there were countless complications- they actually spent about an hour inside trying to fix the problem for me.

Naturally, I tipped them for their trouble! 😉

And the hotel even left this for us to get comfier…

Upcoming post is about a LONG CLIMB up a mountain… We were up so high, it actually felt like I was in heaven. ❤

Hello, I'm Geraldine - but you can call me Gera for short. :)

生日快乐 to the most amazing friend anyone could ask for 🥳🎈🎂 Thank you for being such a ray of sunshine 🌞
This is the group that’ll never admit how old we’re getting 🙅🏻‍♀️, but always complain how old we’re feeling 👵🏻 - yet lohei and karaoke like we haven’t aged at all 👧🏻 P.S. Thanks for insisting I join even though I was flu-y. We had such an awesome night together~ ❤️🧧🍊🍊
May you have a rad Year of the Rat! 🐭🧧🍊🍊
You gotta tahan a little heat, if you wanna stand in the sunshine 🌞 (tahan = tolerate) #positivevibes
#adulting - you smile like that when the man buys #Dyson for the home 🏡❤️ Swipe to see Purrito doing QC on the new toys! #home #purritosashagoh #tripodcat #dysonvacuum #dysonfluffy #dysonv11 #dysonpurecool #dysonfan
The goodest boy is also the bestest way to lose weight and gain muscle. 🐶 Tire out the #goldenretriever and you’re good~ #JoeyDtheGoldie
4-6 Dec 2019 ✈️ 🇲🇾 Happy couple of days away~ 🥰
Blessed ❤️ Because every time I encounter sadness, unkindness or betrayal - I’m showered with happiness, love and warm moments by the ones God put in my life. And I pray that you have such awesome people in your life too! 🤗
Sometimes “bliss” goes for $1.50 from a kindly old couple on a pushcart. 🥰 Disclaimer: this “bliss” shouldn’t be consumed on such a regular basis, to avoid inducing less blissful situations and thereby backfiring your initial intentions of purchasing said “bliss”. 😌#sandwichicecream #igsg