When Mark and I first saw Purrito, we thought she was just a large rat. 🐁 😳

We were going home that evening on 21st July, and I was speed-walking like never before because I had a bursting bladder. (Honestly sometimes I don’t even think I have a bladder… I just have this petri dish that temporarily holds the fluid till I settle myself on a potty.)

Well, just as I was walking at the speed of light – I saw this white little creature limp past me. And automatically thought it was a rat.
We have an embarrassing rat problem at my estate area. 😪

But as we looked more closely, we realised it was a little kitten!
No 🐭, yes 🐱!!!

She was soooo tiny. She was shivering from the cold (it was a terribly rainy season) and obviously petrified for her dear little life. However she couldn’t go anywhere, and the reason was simple – poor girl had a broken leg. 😢

Our first instinct was to feed the little thing!
I think it was this sort of thinking that caused our 3 other cats to be chubb… *ahem*… abundant in body meat.

After some yummy Japanese canned cat food (I do pamper my little meow meows), we managed to bring her home and into one of the shower areas, without much of a fight.

To be fair, she was probably too weak to put up any fight.
The way she ate was like a kiasu Singaporean at an all-you-can-eat buffet… “MORE, MORE, MORE!!! No stopping till explosion!!!

After eating, she cowered in the corner and mewed loudly, and hissed fiercely whenever we attempted to touch her. When the echoes of raindrops resounded in the shower area, she started trembling like she was expecting something bad to happen to her again.

In attempts to calm her, I started singing to her. And thank God for the amazing acoustics in shower areas – almost everyone sounds great inside. 😂

And almost immediately, she started warming up! 😻

She was just dragging her right leg around and using it as a stump. The abrasions on her skin were nasty and looked infected.

Mark and I took the AM off at work the next day to send her to the vet. We sooo wanted her to be treated ASAP, we actually showed up at the vet 30 minutes before opening – then was told she had to be brought into the animal hospital.

She weighed only 0.9KG and the vet said she was dragging that broken leg around for about 1-2 weeks – it’s no new injury. After X-rays, we found that although her bones are fine – her nerve systems were shot. Meaning to say… There was close to no chance that her right leg would ever regain its feeling and movement.

And she dragging it around was just causing terrible skin abrasions which would spread. Therefore, amputation of the right leg was recommended.

I started tearing as I heard what the vet said, and went all… “But she’s still so young! Isn’t there anything we can do??”

Apparently not.
What’s done is done.

It was already written that Purrito would be a 3-legged cat.

However the worst thing was, it seems the hurt done to Purrito was most probably intentional. It was take a huge blow on the shoulder blade for her to actually suffer from an injury like that.

Probably someone hit her; a vehicle knocked her or something. And she just went around for 1-2 weeks limping around from the injury. 😭

What really intrigued me was where did she come from??

Cats are highly territorial – being so, there’s always a few particular cats in the area because they ‘own’ it. Other cats cannot simply just saunter in, and Purrito looks nothing like any of those cats… So she couldn’t have been an offspring.

It’s obvious that she actually came from a distance.

Mark and I have this whole theory that she’s from a breeder. She is a mixed Siamese cat, which is considered a ‘choice’ pet. However breeders are quite heartless when it comes to these animals.

Y’see, the animals are just objects… Inventory, if you will, to them. So when the inventory doesn’t seem like it could fetch a pretty profit, it becomes a liability. And therefore, out it goes.

I know of when breeders just throw puppies/kittens away because the colour of their fur wasn’t a preferred hue; so therefore fetching a lower price. Or some were born handicap… They just get thrown away.

Just thinking about it made me SO ANGRYYYY!!!

What kind of diabolical excuse-of-a-human does something like this?? Honestly, if you go mistreating another human being – I won’t be that pissed. Because many times, human beings are assholes. But these are helpless little creatures that did no wrong whatsoever!

My suspicion is… She probably misbehaved or wasn’t up to standard with the breeder, and they just throw her out violent from the van; therefore causing that injury and left her to die.

WELL, SHE DIDN’T, YOU REPULSIVE MONSTERS!!! SHE’S HAPPY, HEALTHY AND VERY ACTIVE WITH ME NOW! (sometimes tooooo active) AND I’M HER FUR-MOMMY NOW!!! SO YOU GO DIE!

Okay, but to be reasonable… There’s no evidence to show really show it happened. For all we know, she escaped and got into an accident… There are really many possibilities here.

And I’m always thankful that she survived long enough for us to find her.
😊 😊 😊

When we visited her at the vet after her surgery, she was meowing soooo much even though she was supposed to be drowsy on drugs.

Should’ve known since then that this girl has the energy of the Sun.

She meowed nonstop till we put our hands on her. And whenever I pulled my hand away, she would try to use her left paw to hold onto me…

I started bawling while looking at her. 😭 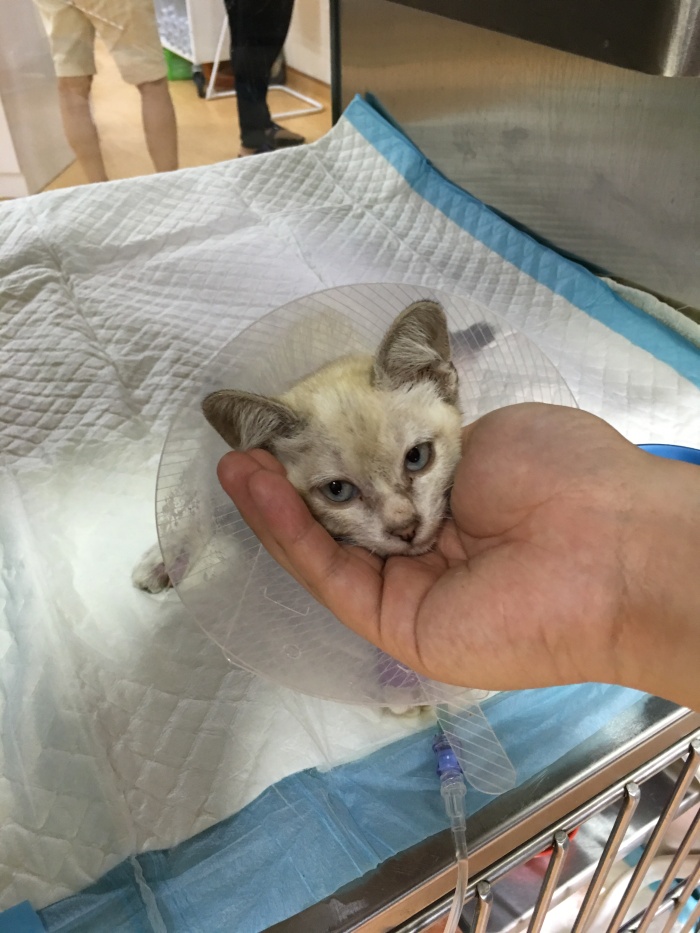 I was almost ready to bring a sleeping bag and set up camp there till she could be discharged.

And it was probably at this moment when Mark realised there was no way in hell I was going to give Purrito up for adoption – I’m evidently wayyyy too attached to her.

But deep down he’s a huge softie for Purrito. ❤️

Few days after her surgery, he insisted that we go see the vet (even though we have an appointment that very weekend) just to check up on her.

Because of him, I basically spent money on expensive dressings. 😒

Speaking of dressings… It was killing us. I basically spent about S$200 getting a whole load of different dressings from the pharmacy because she kept on tearing them apart!

And integrating Purrito with the other 3 cats wasn’t an easy task either… Simply because cats are very territorial – and entry of new cats/dogs/humans/etc requires a process.

After being in the cage for about 3 days, Milkie started accepting her!

Oreo was also more accepting. But Meowster was super reluctant; she just kept on hissing and whacking Purrito.

The first night we let her sleep outside the cage, I didn’t sleep for longer than 30 minutes at a go. I kept on waking up and checking on her… I didn’t want the others to bully her, or what if I accidentally squished her…

I showed up at work the next day looking like a nightmare. 👻

But we are a little over 1 month in now – and things are coming along nicely!

I hardly slept well since she came in; but she sleeps without a care in the world… 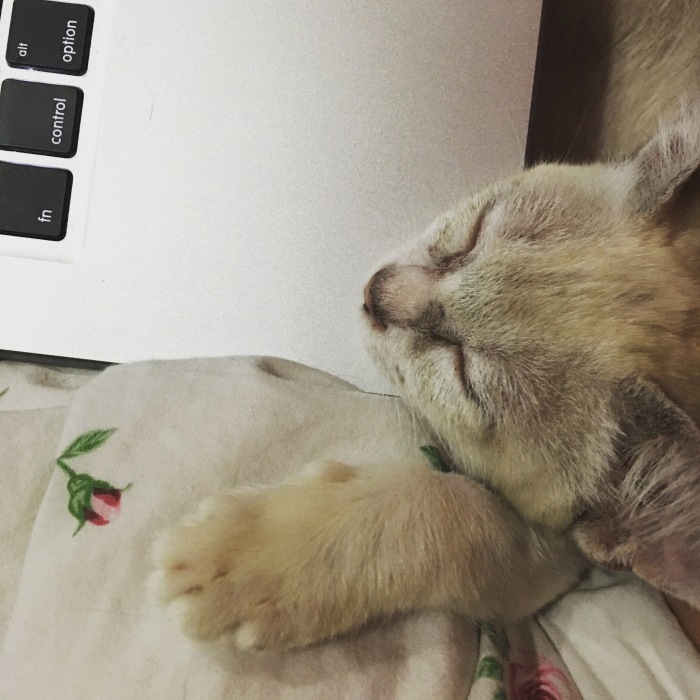 Even though she really kills us and our bank accounts… I’m endlessly glad that we found her. She’s a life example that miracles do happen in life – just when you need them. The vet mentioned how lucky she is; most kittens would’ve been dead sooner… but she lasted long enough for us to find her.

And I’m glad that it was us (animal-loving couple) who found her, not some sicko who would just abuse her even further.

I look at her and I’m just so immensely grateful.

To hell with those bastards who hurt her – they’ll get theirs. We have Purrito and we love her very, very much.

Just before we found Purrito, Mark and I both agreed we shouldn’t have anymore pets till we move to our new house.

We have four cats now. And they somehow always arrange themselves according to size, in ascending order.

And you can see Oreo looking over to Purrito’s direction.

You want to know why??
I’ll tell you why! Because my greedy pig-of-a-cat prefers kitten food to his adult cat food. So he loves to walk over, push Purrito away and shove his face into her bowl. It’s bad because Purrito needs the nutrients in the kitten food… And also kitten food has thrice the calories of adult cat food, and Oreo clearly doesn’t need the weight gain. 😐

Special thanks to my super amazing friends who helped out financially with the surgery costs!! Really, every little bit made it easier for us to cope with. 😊

And even to those who sent their well-wishes and prayers… Thank you! Purrito is a happy & active kitty now!

This video was taken when she was milder… Typically she’s so fast, all I see is a blur…

#PurritoSashaGoh has WAYY too much energy. So invested in this toy to buy us some rest. Girl is cray-cray! #cats #catsofinstagram #catstagram #meow #toy #cute #play #kitten

She suckles on me a lot…

Thank you, everyone, for your love & support for Purrito! ❤️